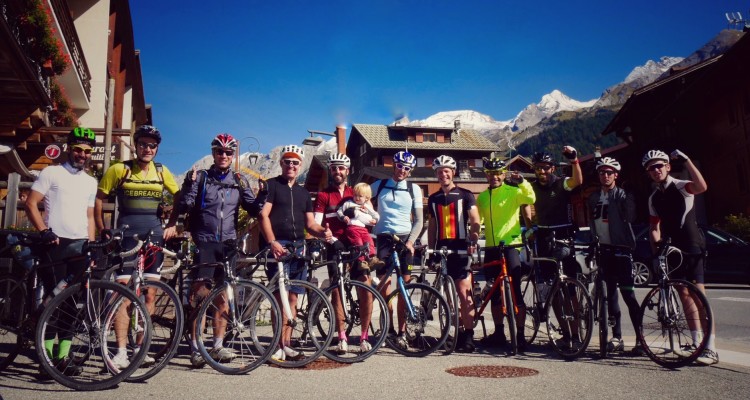 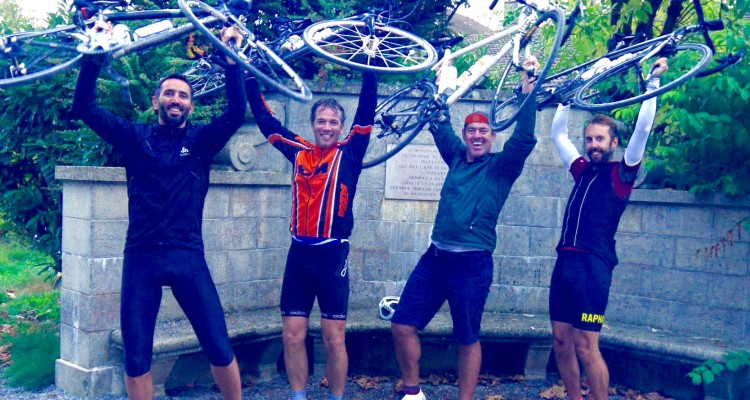 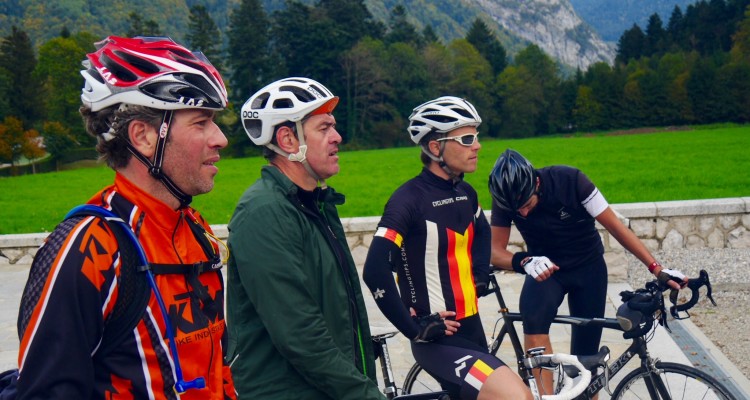 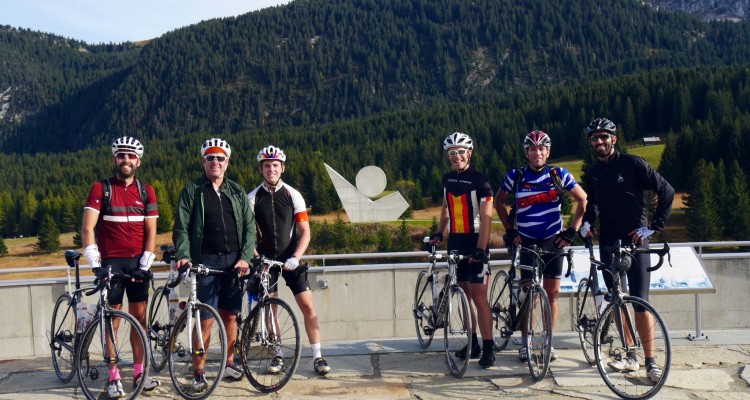 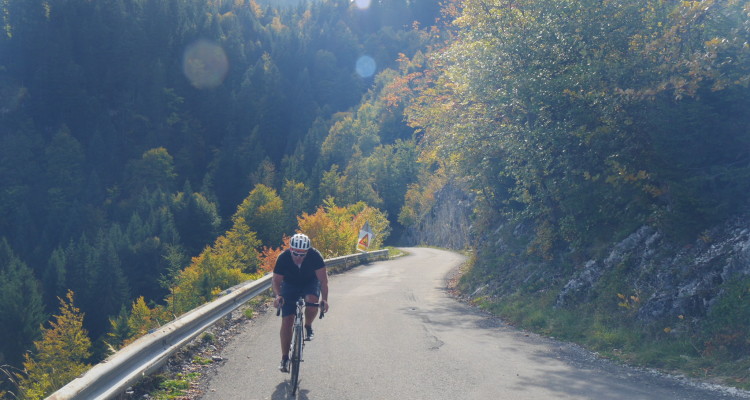 The Pioneers of La Resistance

La Resistance is a brand new one-day, gravel and tarmac cycling challenge in the French Alps which pays tribute to the heroic men and women of the French Resistance who battled for freedom in the Second World War. The first public edition is due to take place in September 2016 but Ross Muir was lucky enough to be invited on the inaugural Pioneers Ride in October of last year.

Annecy is an area of France I’ve come to love since first visiting it on a cycling tour five years ago. Whilst the majesty of the Alps is undeniable, many of the valleys at the heart of the mountain range are towered over by soaring ridges, often limiting cycling options to tacking a Tour de France climb or taking your chances on a busy valley road; options are limited for the cyclist looking for a variety of terrain. For me, this is where the Lake Annecy area really comes into its own. Many challenging Alpine climbs are within riding distance of the lake such as the Col de Colombier and Col d’Aravis but you also have quiet flat roads and rolling terrain should you wish to mix things up. The scenery of Lake Annecy and the surrounding mountains needs to be seen to be believed. On the eastern shore, near vertical rock faces seem to drop straight into the lake. On the western shore, hanging valleys and the imposing ridge of La Semnoz invite further investigation. As confirmation of the area’s cycling credentials, this year’s Tour de France pays a visit.

It is within this landscape of stunning scenery, rolling terrain and formidable Alpine climbs that the route of La Resistance is set. Course designer, Adam Horler, lives right on the shores of the lake and is lucky enough to have the entire Haute Savoie region as his playground. Through his regular riding, Adam became intrigued with the network of gravel roads that criss-cross the area. Could they be combined into a big, one-day ride that would allow you to escape the tourist traffic of the main cols and really savour the nature and scenery of the area, all on a road bike? That was the question Adam aimed to answer and the route he came up with now forms the backbone of the La Resistance challenge.

To test his route, Adam brought together 12 friends in October of last year, to ride the route and provide invaluable feedback. It was for this reason that I found myself in Talloires, looking forward to a really different day out on two wheels. The assembled riders were a real international bunch; local riders brushed shoulders with visitors from as far away as New Zealand and Australia. Some were ex-racers, some were recent cycling converts, some were fanatical sportive riders, some loved touring and the road less travelled. All were united in their interest in checking out what La Resistance had to offer.

Torrential overnight rain slowly gave way to blue skies and sunshine as we departed Talloires along the perfectly surfaced tarmac cycle path that encircles the lake. After 10km we left the lake shore behind us and approached the foot of the first challenge on the route, the Col de l’Arpettaz. This little ascended col is a real hidden gem in the Haute Savoie and for the most part unknown amongst cycling enthusiasts. The beauty of Adam’s route is that by venturing along the gravel road that lies beyond, the col is an almost traffic-free gateway to new experiences. The road ascends the best part of 1200m to reach the summit at just under 1600m. The climb snakes up the hillside through isolated farms and dwellings, through silent woodland and mountain pasture, offering amazing views to the South West at almost every turn.

Have settled into our own paces on the climb, we regrouped at the refuge at the summit and gathered our thoughts. Although we’d conquered the Col, ahead of us lay the 15km Route de la Soif mountain gravel road. Our machines were a mixture of carbon road bikes that wouldn’t look out of place on the World Tour, slightly more appropriate carbon framed “endurance” bikes, steel road frames and probably best suited, disc brake equipped, steel framed touring machines. How would we fair? The road rose and fell a number of times in its 15km length. No descent was long enough to prove truly terrifying on skinny tires (thank goodness) but the ascents, which would hardly register on a surfaced road, really taxed my legs, already fatigued from the ascent of Col de l’Arpettaz. The gravel surface demanded constant concentration – picking the correct line, lifting pressure off the back tire over the metal drainage channels to avoid pinch flatting, braking for corners. With the intense concentration, I almost didn’t notice the amazing view across to the snow clad flanks of Mont Blanc. On a tarmac road we would have pressed on and made only a passing glance towards the view but surprisingly we found ourselves stopping, chatting and taking time to appreciate our truly stunning surroundings. When was the last time you did that on a road bike?!

After 15km of jarring rock and gravel, the Route de la Soif comes out at the top of the Col d’Aravis and rejoins the black top. To our surprise, we’d escaped the Route de la Soif with no crashes, no injuries and only a couple of punctures to repair. A price well worth the fun and the views! After the serenity of the gravel road; the tourist buses and souvenir shops come as something of a shock, but before we were awoken entirely from our state of rapture we were hurtling downhill at speed towards the pretty ski resort of La Clusaz.

The descent continued through St Jean de Sixt and Entremont to our next encounter with adversity; Col des Glieres. This was another new climb for me, and like Col de l’Arpettaz, was almost traffic free. But compared to the modest gradient of the previous ascent, Col des Glieres is a brute. It’s not long, but at 7km and 11% average gradient, it’s long enough. Having been made aware of the savage gradients of the col, I came prepared. 34 x 28 I figured, should be plenty. It wasn’t. It wasn’t even close. I can’t say I’ve weaved on a climb since the age of 10. But on this I weaved. I weaved just to hold onto the prospect of forward momentum. No respite seemed on offer, the gradient was relentless. Eventually all things must come to end and eventually that was true for this climb. The road emerged onto the Plateau des Glieres and another section of gravel lead to the summit by the Memorial de la Resistance. The Plateau is the spiritual home of the ride. It is here that Maquis fighters fought valiantly to resist the occupying German Army and helped lead the way for the liberation of Savoie prior to the D-Day landings. The heroic exploits that took place on the Plateau represent a rare moment of pride for the French amongst the horrors of WWII.

We took a few moments of reflection at the Memorial but were soon descending at speed again, safe in the knowledge that the main challenges on the route were behind us and only 40km remained until we were back at the beach in Talloires. The challenges on the route so far had mainly been solo endeavours but despite the relentless undulations, we managed to work together as a group and expedite our progress towards home. Skies were starting to darken as we rolled back into Talloires to complete the route and confirm La Resistance as a worthy day out for any cyclist. I look forward to returning to Lake Annecy in September to share this amazing route with many new friends.

Your information will not be shared with third parties